To share your memory on the wall of Claud Green, sign in using one of the following options:

Claud passed away on April 28th, 2021, when he finally ran out of stories to tell. Claud was born on May 26th, 1943 to Claud Harley Green and Eula Faye Williams in Oklahoma City. After a four-year stint at Ponca City Military Academy, he went on to graduate from Stillwater High School in 1962, then earned his BA in History at Central State College in 1971.

In 1964 he wed Sandy Frizzell, eventually producing their two children Amber and Chris before divorcing in 1983. In 1995, while working the gates at a University of Oklahoma football game, his wife Terri and her daughter Julie came in to his life. Claud and Terri married on August 31st, 1996 and were best friends for the next 25 years.

As everyone who knows Claud can attest, his first love was really “speed”. From an early age he developed a passion for racing cars, dirt bikes, and dragsters. When he wasn’t driving, he was working on motors and acting as pit crew. His years at Tinker Air Force Base as a civilian contractor also gave him the vicarious high of watching jet fighters and lumbering tankers alike as they flew in and out.

In his later years, Claud slowed down to “just” a Goldwing bike, and became a passionate NASCAR fan. His knowledge of drivers, teams, and performance was extensive. He loved to regale his family and friends with stories about his favorite drivers, from his work life, and day to day activities as well.

Claud was preceded in death by his mother Eula Faye and father Claud, as well as many aunts and uncles. He is survived by his wife Terri (Ham) Green, sisters Bobbie Stuart and Elizabeth Munson, children Amber and Brad Barber, Chris and Anne Green, and Julie Shilling, as well as five grandchildren, Bailey Barber, Carson and Joelle Barber, Garrison Barber, and Rachel Longstreet.

The family expresses deep appreciation for the helping hands and care provided to Claud by Elara and Valir hospice services, Heritage Skilled Nursing home in Tecumseh, OK, and Stephanie Christian of Healdton, OK.

Visitation will be Monday, May 3rd from 6pm to 8pm at Alexander Gray Funeral Home in Wilson, OK. The family requests that flowers be sent to the funeral home. Donations in lieu of flowers may be made to the Alzheimer’s Foundation.

To send flowers to the family or plant a tree in memory of Claud Raymond Green, please visit our Heartfelt Sympathies Store.

We encourage you to share your most beloved memories of Claud here, so that the family and other loved ones can always see it. You can upload cherished photographs, or share your favorite stories, and can even comment on those shared by others.

Flowers were purchased for the family of Claud Green. Send Flowers 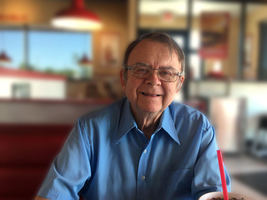